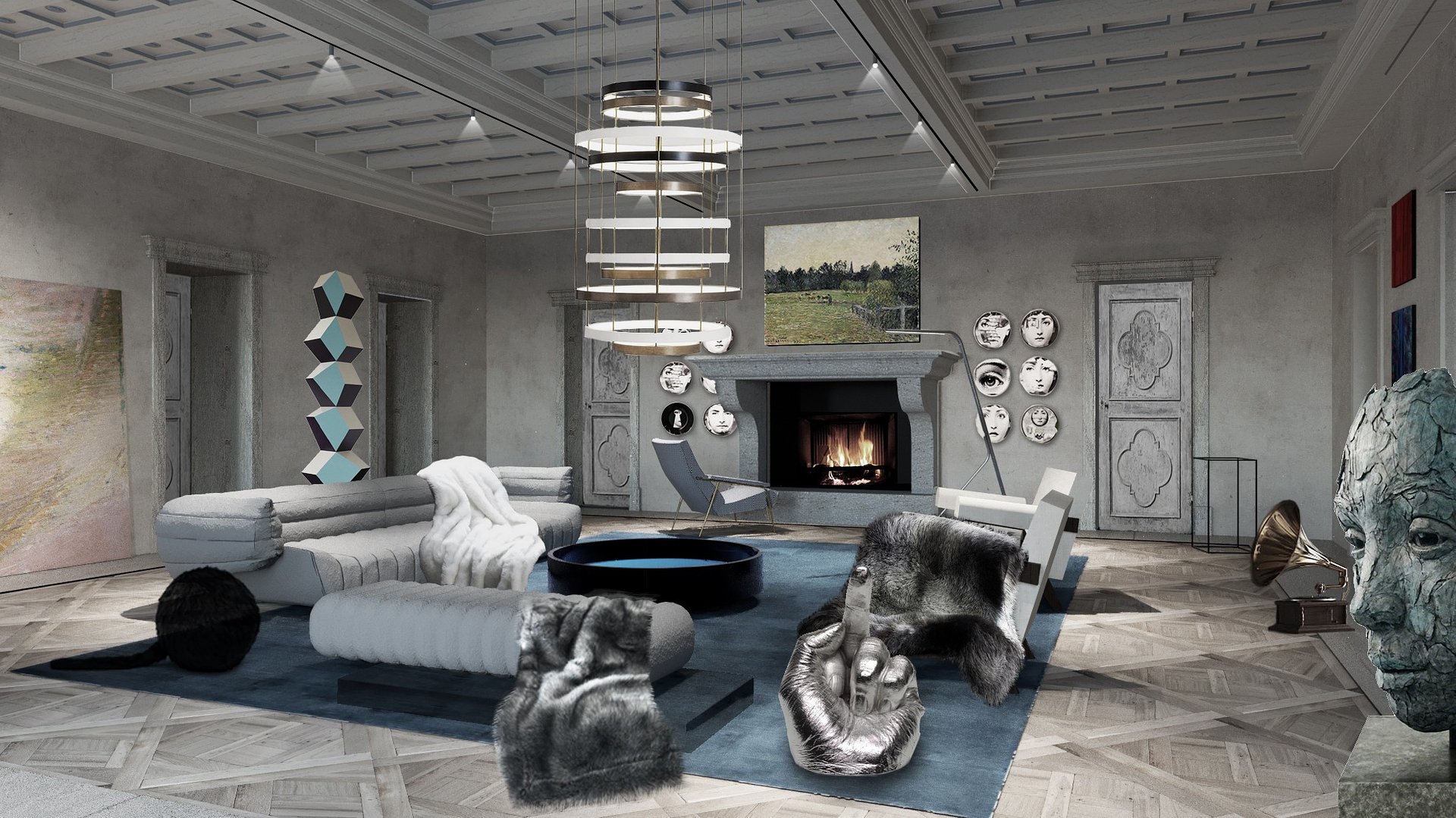 Colle Allegro "New Tuscan Luxury Life Style" is the pay-off of the project, inspired by the style that the Gori Family wanted to give to this place. The project aims at giving back this style to an area characterized by the shabby rural genesis and unfortunately decayed.

The project is a work of the avant-gardes, a scratch by Fontana, which doesn’t want to be limited to the simple recovery of the area and its architecture, but it was imagined to paint on a canvas with fast signs, to scratch the place by creating on it constructions that show the viewer how a modern three-dimensionality exists and is ready to dialogue with the past.

The Villa is the focus of the project, 5 completely independent luxury apartments with the same floor area, with views on both sides of the property, "loft" atmosphere and 3 common areas on the main floors that represent hospitality, entertainment and the owners.

All apartments have entrance from the common areas located in the center of the building and any surrounding area is easy to access through the creation of two connecting staircases: one, almost carved, is a link between the ground floor and the first floor, whereas the other, instead connects the first and third floors. Both staircases are placed respectively on the front side and on the back side of the building. The housing units are inspired by a Wabi-Sabi vision, a praise to imperfection of temporary and unfinished things and to the beauty of unusual things. Each unit is characterized by antique wood floors, lime based wall finishes and coffered ceilings made by an Umbrian Master based on what is already present and recalling the past. 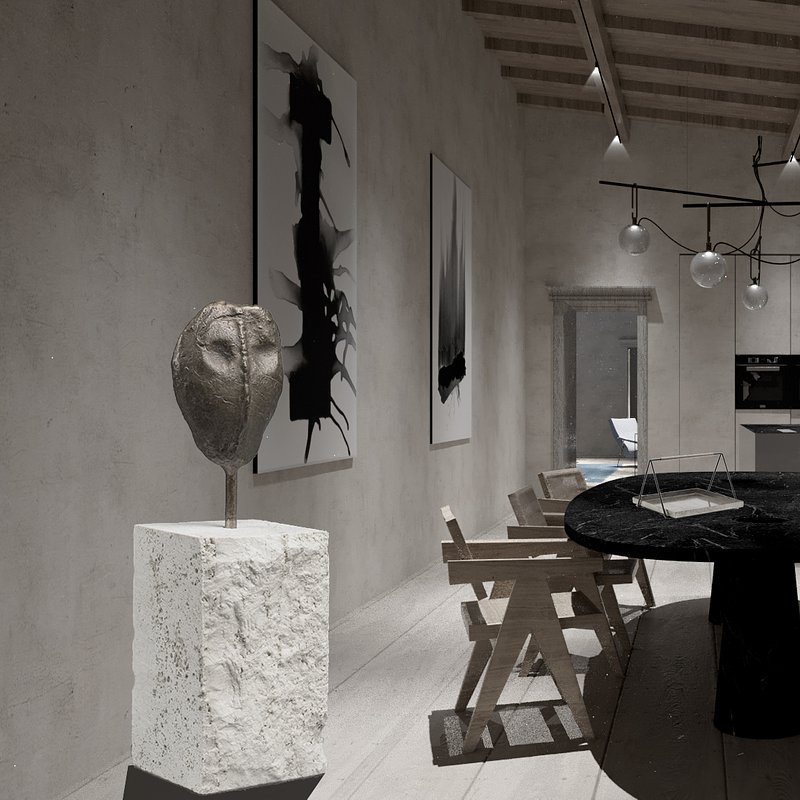 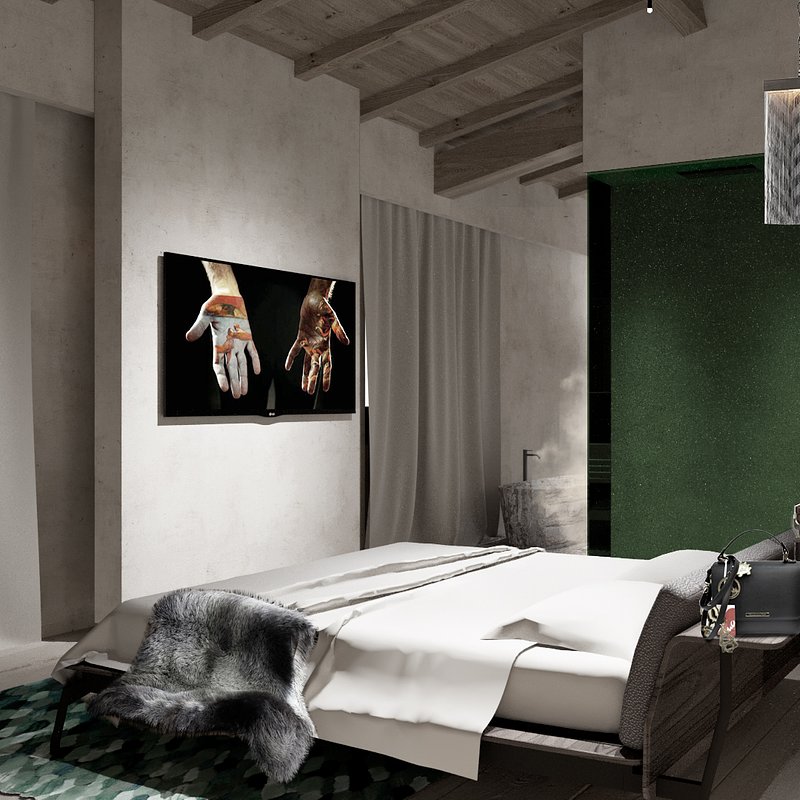 The intervention involves the recovery of an underground passage that historically was used as an escape route most likely because of the war, rather than to hide "habits from Decameron" of the Lords of the past. From the passage there is access to one of the residences, which thus has a privileged entrance to the elegant garden in front of the Villa, characterized by enormous secular trees including redwood, a very rare plant type for the area.

The most important thing of the renovation works is to preserve the Family Chapel which is set inside the geometries of the apartment. In the Chapel there are many references to the Families who lived the Residence and the late nineteenth-century frescos, shades of blue which gently rest on all the wall hangings.

Divided by the Italian-style garden but connected to the Villa by a 15-meter walkway, there is a two-story contemporary architecture set into the hill. Only one floor is partially above the ground resulting from the removal of a substantial portion of hill, and then it was harmonized through a 1200 mq garden roof, on which autochthonous trees have been foreseen. The new building will create a unique space. Inside we can find a 500 sqm SPA, 4 guest suites and a winter garden which is connected to the underground car park for 20 vehicles, close to the upriver excavation. With its position, the parking space acts as a filter element in the internal roads, preventing the creation of traffic in front of the Villa and guaranteeing comfort and fully usability for all guests.

The new spa is 500 square meters of size and it is created as the celebration of the meeting between the majesty of stone and the fluidity of water. The spa will be a space entirely based on the care and well-being of the person with 10 stations: chromo-therapy shower and steam baths, relax area, Turkish bath, hot tub, sauna, swimming pool with counter-current swimming, Kneipp path, salt room and massage room. The hydromassage area will be the center of the project and it is part of a loop of the ground that contained tanks for collecting rainwater. It will be characterized by a pool of water with an elliptical cut in the center, which sculpts an air ring always maintaining the dialogue between nature and architecture. 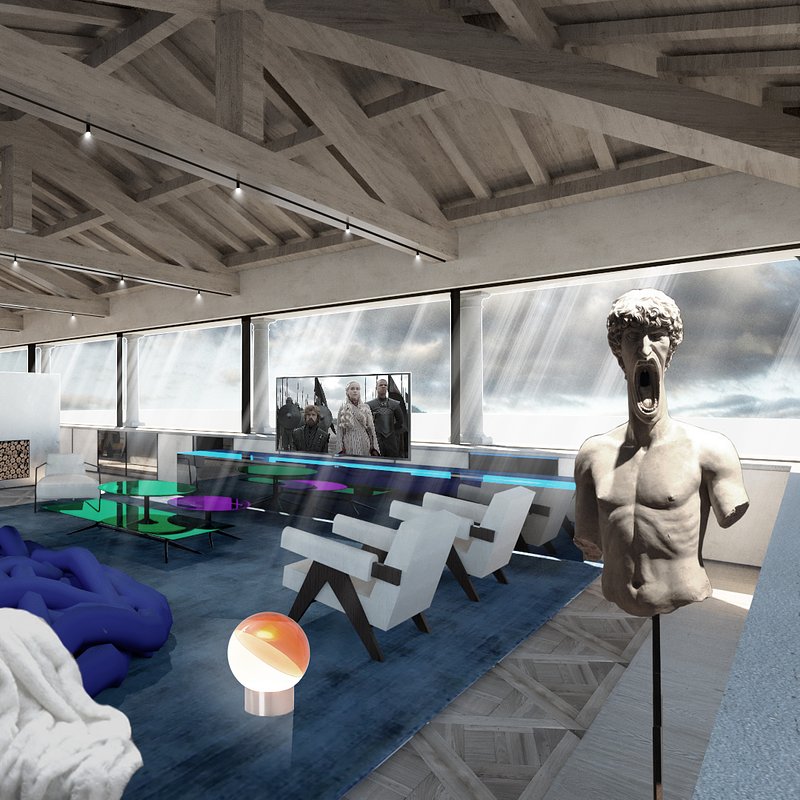 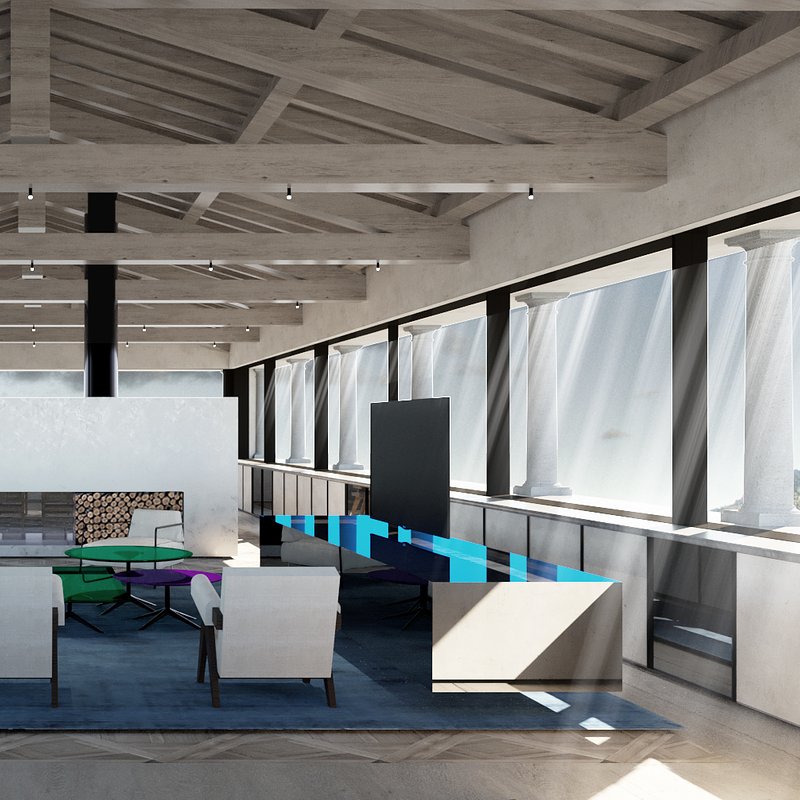 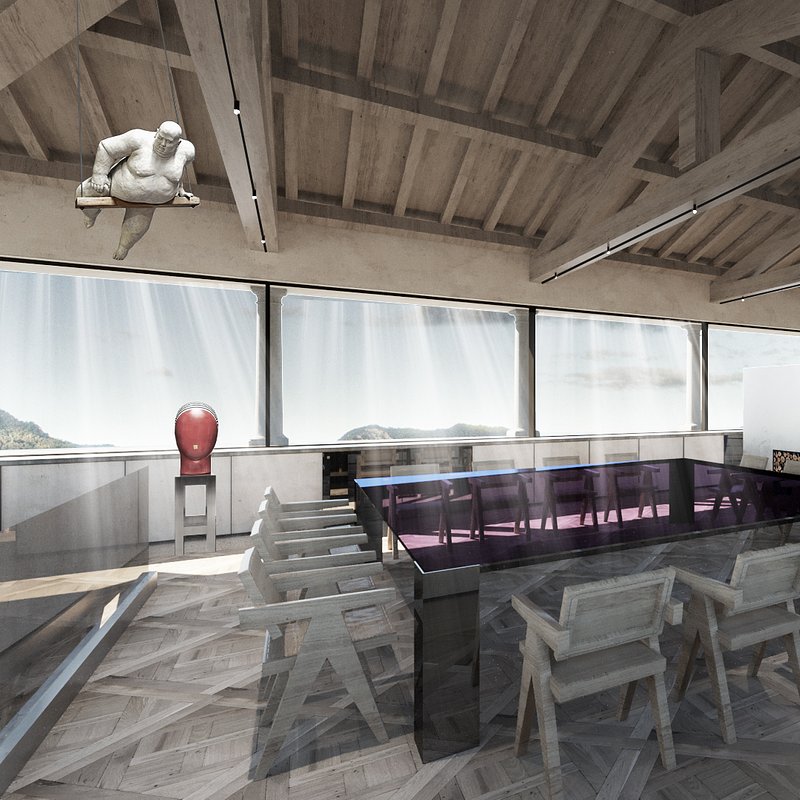 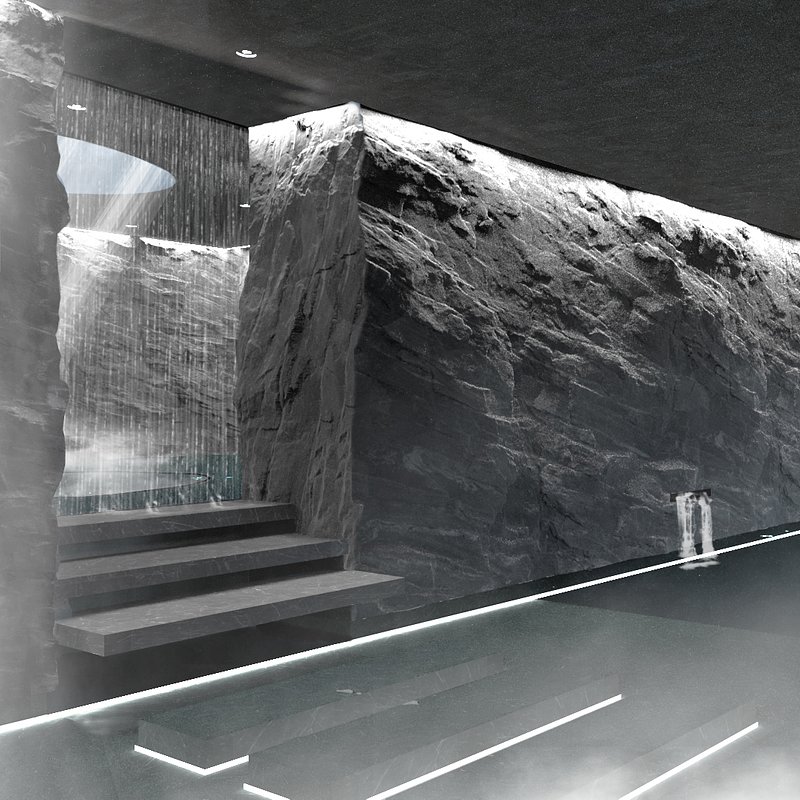 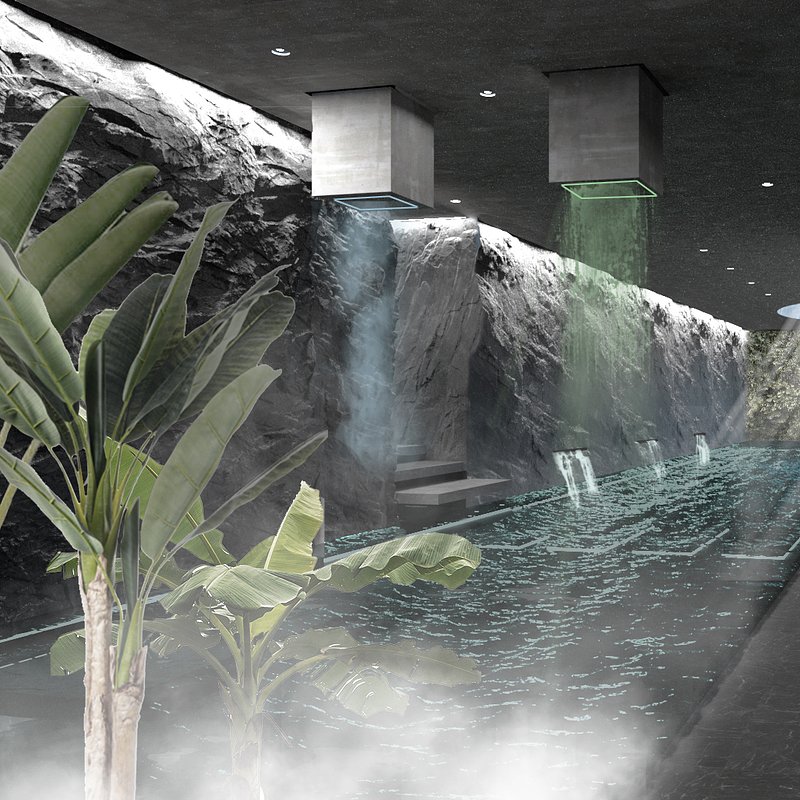 FROM THE LANDSCAPE POINT OF VIEW
In terms of landscape, the main purpose was to maintain all the existing plant species. Flowering and non-flowering plots of land and hedges of different species typical of Italian gardens have been included in the project in areas where the lawn would have had difficulty growing.

A roof garden was designed to cover the spa area, and two winter gardens for the exclusive use of the apartment owners and guests of the suites. The two gardens are distributed on two different levels and have a microclimate that allows life to exotic plant species. In this space, commercial elements as well as areas dedicated to meditation have been included.

Regarding the nightlife of the park, a lighting concept with direct, indirect, refractive and emotional light sources has been designed. Direct light sources with a limited light intensity tend to illuminate the surfaces of the floor without dazzling visitors, whereas the indirect ones are spectacular and tend to illuminate the object, such as the tree or a sculpture from the ground upwards. The refractive light sources play with the water, creating a magical atmosphere and the emotional lights play with the branches of the trees.

"Order is the pleasure of reason but disorder is the delight of imagination" [P.Claudel]

The private house G103 in Arezzo is made from the fusion of white and black, the yin and yang inside an interior design project and interpreted as colours of transformation and evolution. The same transition the owners experienced from a couple to a family translates int...