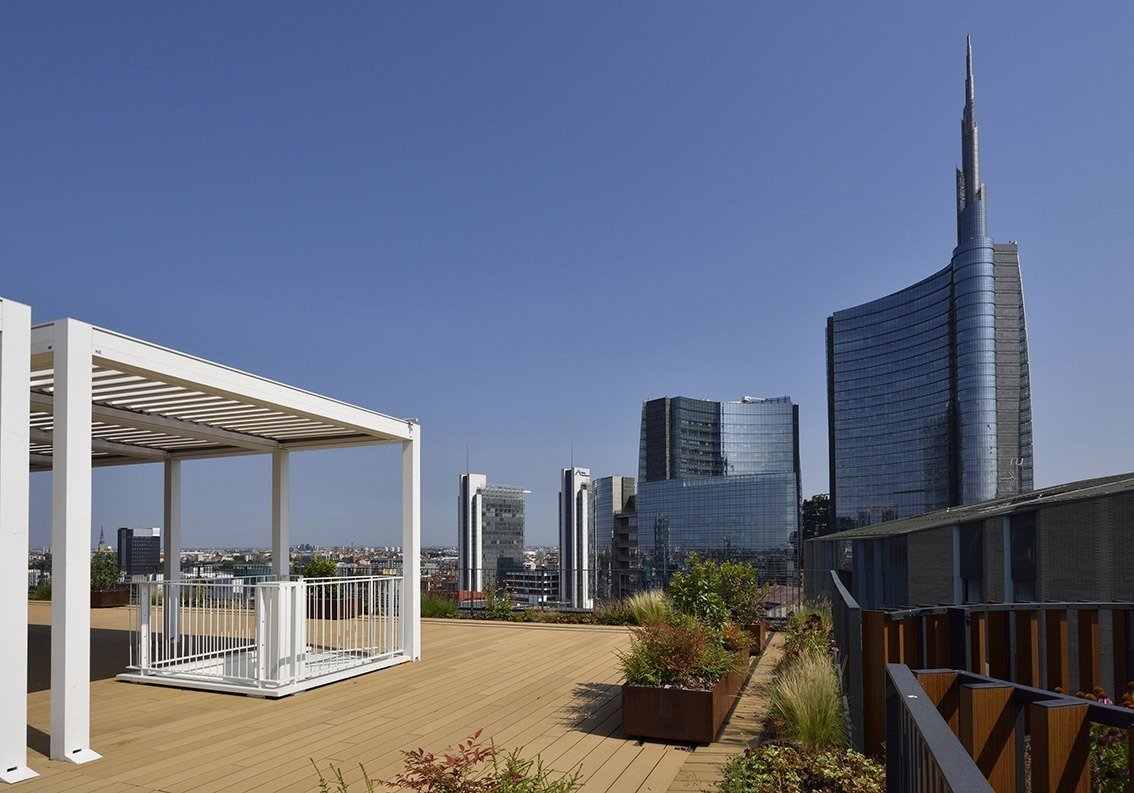 A new concept of hospitality opens in the heart of Milan

Milan, May 2021 | Milano Verticale | UNA Esperienze, the four-star superior hotel opens to the public as the new benchmark for hospitality in Milan.  The architectural project for the interiors and outdoor areas by Vudafieri-Saverino Partners aims to overcome the traditional concept of “hotel” by creating a space open to the city. At the same time, a city hotel, a F&B destination, a location for business meetings and a hub offering innovative services.
The structure has set a new benchmark on the hospitality scene, and not just in Milan. 173 rooms, approximately 600 m2 dedicated to restaurants and bars and a 1000 m2 internal garden. The hotel is located in the Porta Nuova – Garibaldi – Corso Como district, the area that represents the urban development and rebirth of Milan. Not just an important business quarter but also a go-to zone for design, finance, fashion and food & beverage. Concreta played an important role in the realization of this ambitious project. Concreta is an interior contractor based in Postalesio in Valtellina and it is specialized in customized furniture for hotel structures. In the Milano Verticale project, Concreta expressed its great attention to detail and its global approach combined with the ability to work in full synergy and in collaboration with the Vudafieri-Saverino Partners studio, following each phase of realization of the project. 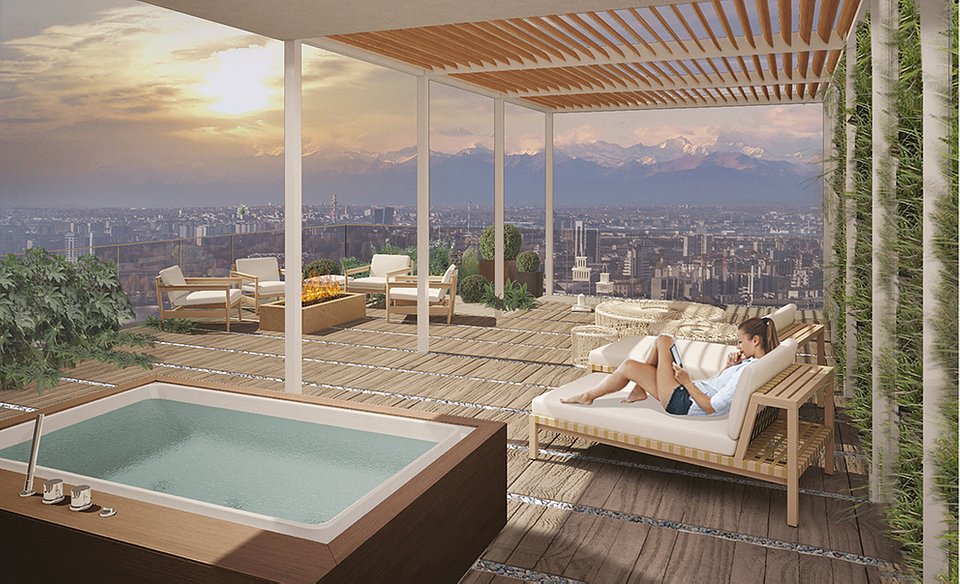 THE CONCEPT: A NEW URBAN INVENTION FOR EXCHANGE, ENCOUNTER AND SOCIALISING
Claudio Saverino and Tiziano Vudafieri have designed a new level of aesthetic and environmental experience to make Milano Verticale a place of uniqueness and distinction. Not just interior architecture, this is also a reflection on our new sense of time and space, our sharing of social experiences, work and play, in a setting with great visual and physical personality. The result is a hotel where visual identity, interior design, tone of voice, reception areas and entertainment tell a single, shared, consistent story.  At the core of the project is Milan. The interiors are a contemporary reinterpretation of the tradition of Milanese design, with references to the elegant modernity of Milan’s maestros from the post-war period, evident in numerous details, such as the use of multi-colour marble and Lombardy stone.  In the hall, reception, lounge and lobby, the storytelling is entrusted to spectacular marble walls, ceilings covered with different colours and a large, double-height space that leads out into the internal garden.
Milano Verticale | UNA Esperienze in fact also celebrates typical Milan-style understatement, with one example being the tradition of hidden courtyards that were the inspiration for the hotel’s magnificent private garden. But above all, Milano Verticale has been conceived as an extension of the city itself, an urban device at the service of Milan, with ground-floor amenities designed to play an active role in dialogue with the city: the hotel’s public functions. The structure has therefore been conceived as completely permeable and outward looking. Signs of this openness are the large internal garden, the redesign of the external forecourt and the whole of Via Rosales, restoring the link between the façades and exteriors and lending continuity to the vegetation in the public and private spaces. The existing building was completely renovated by Asti Architetti, responsible for the architectural project for the façades, part of a redevelopment project of enormous value for the entire block.

ACCOMMODATION
The hotel has 173 rooms on 12 floors.   The same materials and concept that characteristics the public areas continue into the bedrooms: the “public” and private part of the hotel in this way speak the same coherent architectural language.The rooms stand out for their careful choice of just a few minimal materials: floors in ceramic stone and dark oak parquet, walls in marmorino plaster divided into large areas of colour in slightly different shades and bedheads in ribbed walnut wood. Worthy of special mention is the custom-designed desk/console table in brass, a constant player in the hotel’s story and pivotal element for the rest of the room decor. Featured in all the rooms, its structure changes to adapt to the different layouts and arrangements, making it a strongly architectonic object. Another highlight of the hotel is its 530 m2 rooftop area on the 13th floor, belonging to the 4 Penthouse Suites: 4 exclusive super attic apartments with large panoramic terraces and jacuzzi pools. Rooftop and Penthouse Suites can be completely customized to suit different needs and can be modulated according to use. They can even be turned into a totally personalized single apartment measuring over 900 square meters. A location with unparalleled 360° views of Milan’s skyline and the Alps. 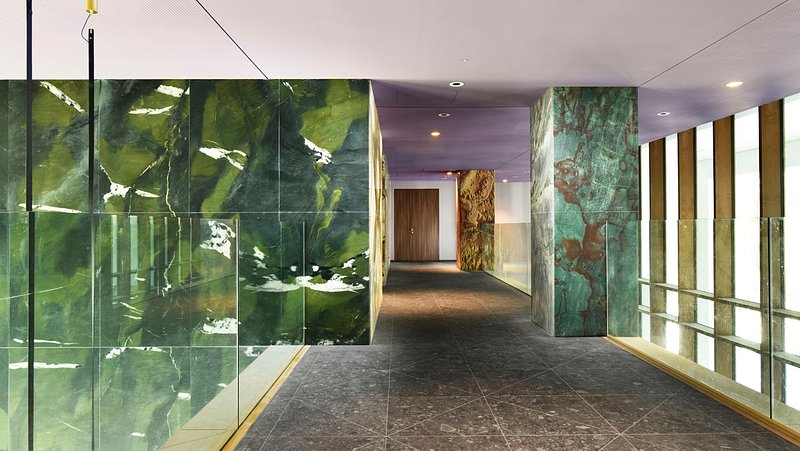 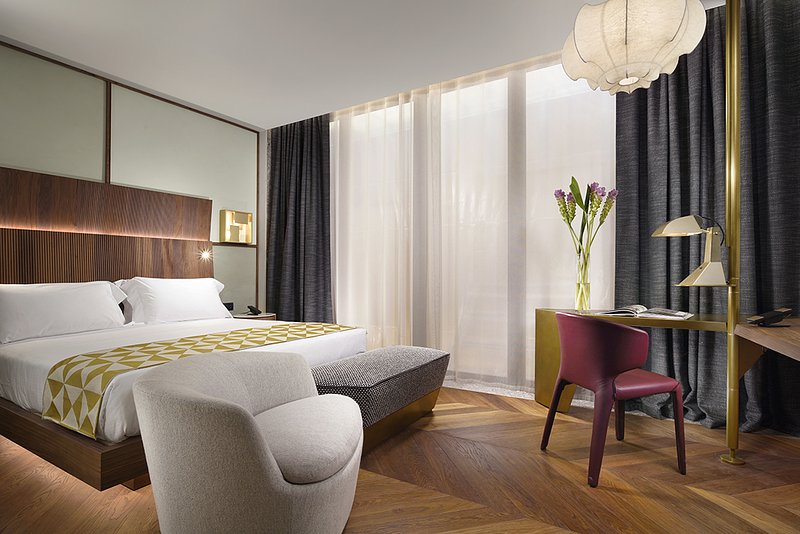 CUISINE BY FRANCO ALBERTI, THE CHEF ON TEAM ENRICO BARTOLINI
Tiziano Vudafieri and Claudio Saverino have worked side by side with Chef Enrico Bartolini, to give shape, sense, soul and function to the hotel’s kitchens and eating areas.  In fact, the real feather in the cap of Milano Verticale | UNA Esperienze is its cuisine, which offers three concepts: a fine dining restaurant, contemporary tavern and cocktail bar, all curated by Franco Aliberti, resident chef and the new entry on team Bartolini, the undisputed main player on the Italian gourmet scene. Three interpretations that express the rich heritage of Italian tradition with sustainable modern taste. Linking these three public F&B locations, open also to non-residents, is a huge sloping tiled ceiling that contracts and dilates, making the three spaces fluid, connected to each other, but at the same time perfectly identifiable.
The first environment is “Vertigo, Osteria Contemporanea” an open modern-day tavern with views into the kitchen and a natural inclination to project out towards the exterior and the garden. Here the great classics of Italian cuisine are the protagonists, prepared using top quality ingredients, in an informal atmosphere. The Bar with urban garden boasts a cocktail&drink list put together with consultancy from Mattia Pastori and food pairing by the kitchen.  From the cocktail bar to the “Anima” fine dining restaurant, the atmosphere becomes more intimate and perfect for evenings, with its ten gourmet tables in their very elegant setting and two private rooms seating six and eight diners. Two tasting menus embrace the philosophy that has always distinguished Franco Aliberti’s cooking, linked to the sustainability of the ingredients and the entire supply chain. With Milano Verticale | UNA Esperienze design, creativity, food and wine come together to define a new level in contemporary hospitality.
THE GARDEN PROJECT
The outdoor spaces play a very important role in the project: the surprising internal garden provides more than 1000 m2 of peace and quiet for chilling in the heart of Milan, to be enjoyed at any time of day. The landscape project by Vudafieri-Saverino Partners with P’Arcnouveau, was inspired by the Milanese tradition of secret courtyards, often hidden behind the sober fronts of noble palazzos in the city centre.  The entire ground floor of the hotel acts as a filter for this space, separating it physically but not visually from the adjacent streets, in a continual game of rapport between inside and out. From outside in fact, the garden can be perceived as a jewel, glimpsed by passers-by and arousing their curiosity.  This indoors-outdoors visual continuity contrasts markedly with the difference in sound. Outside all the noise of the city, inside only the murmur of clients and, in the background, the reassuring gurgle of water, an element that visually and acoustically characterises this space.The area where the bar and restaurant tables are neatly set out is in fact defined by the channel of water that runs the length of the garden. An informal space for ‘déjeuner dur l’herbe’, where nature is an ever-present element. Just beyond the outdoor area set up for bar and restaurant use, the garden unexpectedly becomes informal landscaping. The plants here include paperbark maples, tulip trees, honey locusts, katsuras, groups of shrubs, grasses and herbaceous species including viburnum, Cornelian cherry trees and miscanthus.
The materials and finishes are all about the spontaneity of nature and are juxtaposed to create contrast: the smooth stone edges of the water channel with the base in dark schist that seem to rise up out of the ground like some ancient rocky tool. The hardness and mass of the huge cages in natural metal, filled with large pebbles enhance the lightness and softness of the lawn. The forecourt at the front of the hotel entrance hints at the presence of the garden inside, in a privileged relationship. With plenty of hardstand for drop offs, this renovated versatile area can easily be transformed into external exhibition areas when needed. Here a large southern magnolia stands proud, preserved during the renovation work. The public space down the entire side on Via Rosales was also redeveloped with a project that sees hardstand alternating with shrubs and trees in pots. 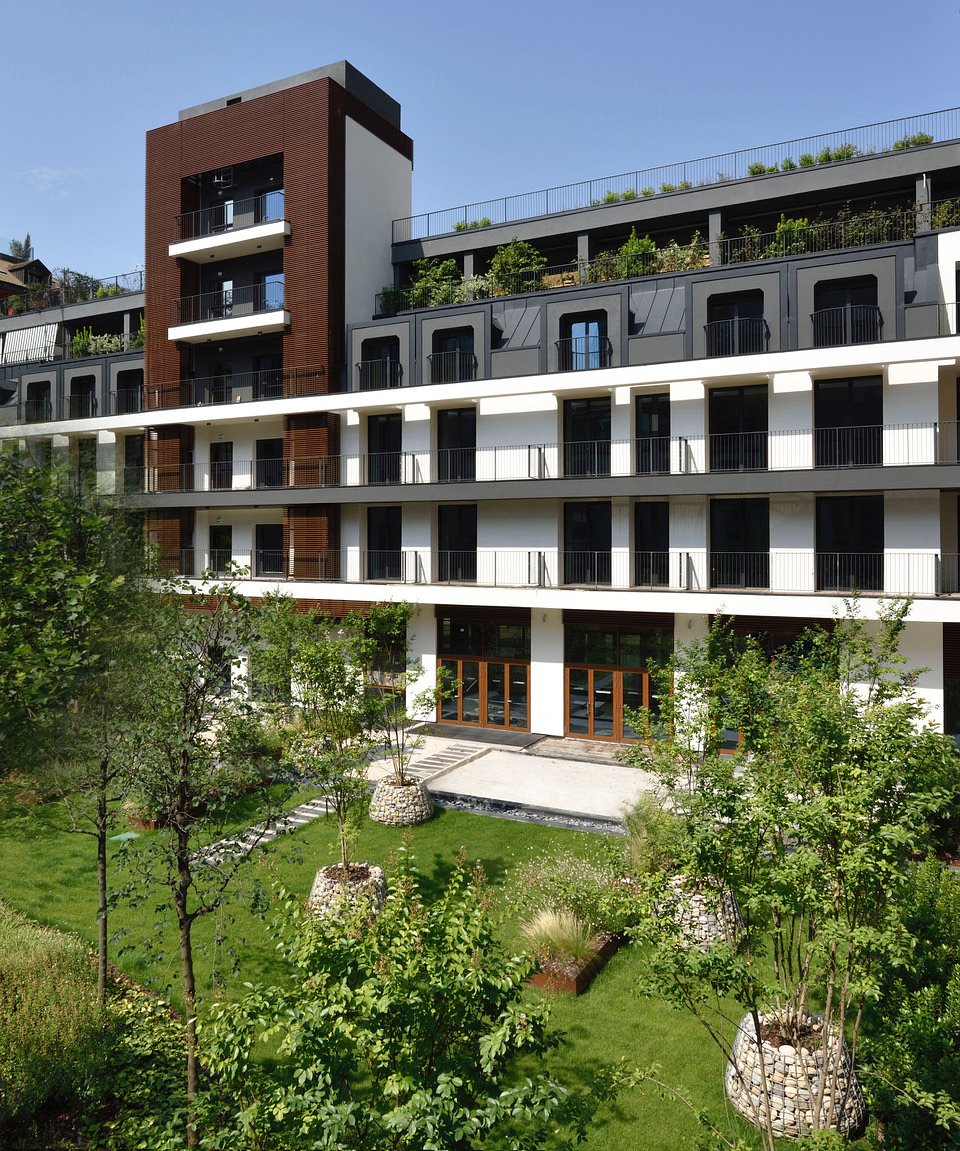 Embellish spaces with bespoke dressing in collaboration with the best architectural studios.

Embellish spaces with bespoke dressing in collaboration with the best architectural studios.